Just a quick update on my project to take my chickens into the sustainable future of solar power. The basic premise of solar energy is that you can take energy from the sun, store it and use if for later. 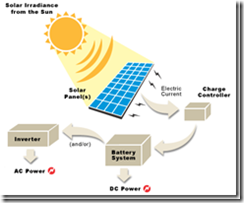 I’ve been wanting to experiment with solar for a while and I was at Fry’s Electronics the other day and they had just what I was looking for to get started. A completely weatherproof, 12 volt, 5amp battery trickle charger, which just screamed “Put me on the chicken coop roof!”. 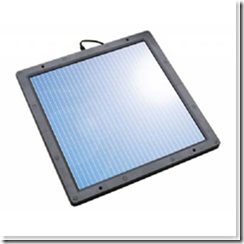 When I have my weekend free (hah!), I’ll be mounting this to a couple of 2×4′s on the coop roof. What I like about it is that besides the compact nature, it also has a built in blocking diode to keep it from discharging the batter at night and, although it doesn’t really say, I assume a build in voltage regulator as it’s meant to charge a car battery.

The solar charger has 10 feet of wire and a pair of battery clamps, so it should be easy to run the wire down into a weatherproof box and clamp the leads to a car battery inside. 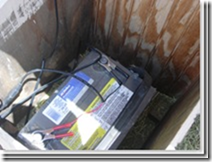 The car battery is in turn hooked into a small 140 watt power inverter inside the battery enclosure and a pair of 12 volt computer power supply fans. Between the battery and these components I have two light switches so I can turn on either the AC power outlet or the DC fans.

The light switches are encased in weatherproof switches, and I have an old extension cord plug plugged into the inverter with the other end wired into a weatherproof outlet box. 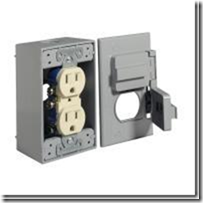 Assuming this goes well, I’ll be adding a floodlight on top of the coop as well to be powered by the inverter so that I can have lights running in my side garden at night. No more weeding by moonlight!

I’m hoping to have everything assembled and installed in the chicken coop by August. Based on a 5 amp power supply from the solar panel, I figure I can run my .16 amp fans all day long and keep my chickens cool while I also charge up the battery.

It’s a fun experiment with solar power, I’ve got most of the components assembled and now it’s just a matter of putting all the pieces together and keeping my fingers crossed. Assuming it all goes well, I’ll probably move my automatic watering timer onto the 12 volt circuit as well.

And while my daughter may only be four, I think this would be a great way to introduce her to the basics of solar power and DC current theory. I also found a great web site at opamp-electronics.com with a section on various tutorials and experiments, absolutely great for the the beginning hobbyist who wants to do a little experimentation 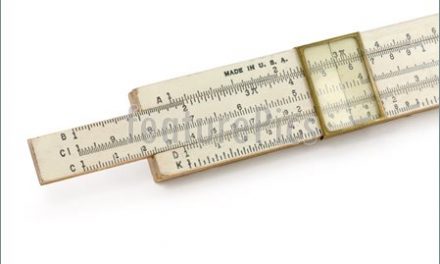 Why Are You Applying a Fixed Width To A Collaboration Site?

Some Nearby Stars May Be Older than We Thought