So if you have installed the Oct 2011 CU, you may have noticed a little issue… especially painful for someone who didn’t test and deployed to production as of course CUs cannot be rolled back (Unless of course you’re using the VM snapshots, and even then it’s a pain).  Now the issue comes up when the user attempts to upload a profile picture when editing their profile in mySites.  Instead of uploading they get this ridiculous msCryptic error message: 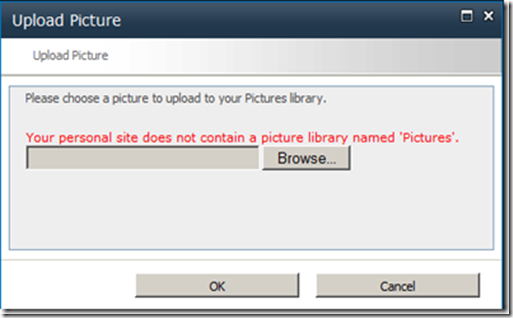 Now there are quite a few code changes between the August 2011 CU version and the October 2011 CU, and it looks like the LoadPictureLibrary method is the culprit for this gaff.  Unfortunately, what this means is that this will prevent Administrators from uploading profile pictures via PowerShell as well.  So there is no method in the currently released October CU to upload profile pictures that is currently functional.  I know it’s a lot to test, and Microsoft does say that their CUs are not fully regresssion tested, but really?   Thanks Microsoft.

EDIT: A more detailed explanation of the code issue can be found here.